A downloadable game for Windows, macOS, Linux, and Android

Feud is a turn-based strategy game made by some guys you haven't heard of yet. Originally a board game designed by Dave Cordell, it's been polished and tweaked and generally mucked about with to bring it to the glowing screen you're reading this description on. Unless you printed it out? Think of the trees. Please.

Imagine chess, but on a four-by-four grid, where pieces are swapped rather than moved, each piece has its own special ability and--

OK, not so much like chess. What you can expect is a highly condensed little abstract strategy game which is easy enough to learn but quite tricky to get good at. The AI still beats us sometimes. The computers are winning. Please get good at Feud so we can beat them.

Please note that we do not recommend playing Feud during your commute if you walk to work, especially if you live in a city with lots of open manhole covers which is pretty much what I imagine New York to be like. I dunno, I've never been.

You haven't told me much about this game yet, to be honest!

I'm not very good at this. Sorry. Anyway, look, the game's pay-whatever and only a couple of hundred megabytes. You might as well, really.

Fantastic game. Roughly 5 minute sessions. Two difficulties (the harder one beats me roughly one third of the time, which is perfect).  3 AI 'players' with different tactics, and a wildcard selection that chooses one at random but doesn't tell you which (emergent play).

The 'juice' and interface are exemplary. Tokens are just large enough to be selected with confidence that, on a phone, the one you pick is the one you were intending to pick. Attacks/Actions have distinct audio and iconography. The pacing of the actions is long enough to make it very clear what just happened, but never lingers to the 'get on with it's point. Pieces look distinct, even pallet swapped tokens for similar pieces on the opposing team. If you are going to win in the next turn, the AI skips it's action to save you a half second instead of dragging things out. If a piece isn't available to act with, it's icon closes it's eyes so you can tell at a glance.

The game itself is excellent. There's no Nash Equilibrium regarding what course of action to pursue. It's equally viable to shift the board around until the opponent has no decent plays left and win via positioning, or to assassinate the opposing King piece via archers, or to turtle your medic in such a way as to ensure you recover slightly more damage each round than the opponent can deal, or to positionally control their multiattack pieces while using your own to whittle them down, or to force them to skip action phases enough to force a forfeit, or or or or or. Each strategy has a counter, and to win it is necessary to constantly read the board and adapt your strategy. It's engaging, is what I'm trying to get across.

I have barely dipped my toes into the online multiplayer. The hotseat Android version does let you chose between passing your phone back and forth or laying it down and playing facing each other (it flips the opposing pieces to make them more legible to someone looking at the phone 'upside down '). Little quality of life features like that are awesome.

Improvements? Maybe let the player chose to go first or second in single player. A Grandmaster AI that swapped between the other AI strategies depending on how the board looked would be neat. Daily challenges (game starts halfway through, player gets one shot). A quick start button that picked hard chaotic (unknown AI) with randomly chosen initial board setup and the player randomly going first or second. Being able to review previous online matches move by move would be educational. These are all nitpicking, the game is very much complete and entertaining the way it is.

I've been playing this game for a while which I got in the racial injustice bundle, so thanks for putting this in there!  I really enjoy it, but there's a few things I'd suggest.

Thanks again for the game!  I'm looking forward to seeing what improvements you have next!

Hey, thanks for your feedback. I'll look into the possibility of offering the itch.io Android version as not including Google Play Services. :)

No problem!  I see a ton of feedback here, and I think a big reason is people see so much potential with this game!  It really is fun, but with some more refinement it really could be great.  I hope your game gets more recognition because it really deserves it!

That's so kind, thank you!

Reply
Dave the Knave1 year ago

Thanks so much for submitting this game to the itch.io bundle for racial justice and equality! I've finished my review of the game for my indie gaming site and had a great time playing it.

Hi there,
yesterday I stumbled (here) over this litte game and I like it   :D

I'm playing via Steam and look forward to a (paid) app on android    :D

Reply
The Frostburner1 year ago(+1)

A neat example of the essence of board games ported to digital !  The mechanics are smart and simple, easy to understand, not-so-easy to master ! Beautiful yet simple graphics, challenging AIs, I overall really enjoyed the game, though I have some suggestions :

Keep up the good work !

Hey, thanks so much for checking out our game :) I've made a note of your feedback!

One thing I'd suggest you check out is the "auto-advance" option in the settings - this will automatically advance the turn if a Knight or Medic has no attacks left, as you suggest. We didn't make it the default behaviour because in our play testing new players found it confusing, but it's there if you'd like it!

Hey there! I liked your game and added it to my little list of indies like table top simulator! (: Im aware your game isnt actually like tabletop simulator, but I figured making videos like these is a good way to get indies exposure! Here it is if ya wanna see it!

Awesome, thank you for featuring us!

A very simple and elegant strategy game, which gets perhaps a little too easy after some time training against the AI! However, one can also play online or versus a human, and then things get much more complicated...

fun game, but there is a bug that does not end the game even tho you cant go on the other side, that should be considered a draw, but the game continued, pls fix that thx

Hi, can you screenshot the board when this bug happened?

wait, i was jk. Later i found out that we got isolated. I was just mad lol

Reply
ox2 years ago(+1)
I actually rather enjoyed this game. I got roughed up a bit, but that's OK  :)
Reply
Joel Auterson2 years ago

Awesome! This is great 😄

Playing on Android against my friend on IOS. They get notifications but I don't. Dope game though!

Free, easy to learn turn-based strategy game in Early Access. It has various colourblind modes. It's straightforward and fairly elegant already, so worth checking out. 3/5 stars - enjoyable.

A very nice game. Would like an option for faster animations.

Agreed; the game goes way too slow and should also have blank health pip graphics instead of making them disappear when taking hits, since that makes it needlessly challenging for newbies who don't remember how much health is left remaining for which units.

I killed an enemy AI king and then Android wouldn't even give me the victory... "Unfortunately, Feud has stopped."

This game has great ideas and the static graphics are drop-dead gorgeous in their own simplistic way, but the animations are nowhere near as clear as they could be to show what exactly is happening, or could happen, per turn.

Hey, thanks so much for this useful feedback. :) The next update will feature updated health pips and I'll try and speed the animations up a little too.

Per the crash - sorry about that! Unfortunately I only get crash logs on the Play Store version of the game, but I'll have a look and see if anyone else has had the same issue so I can work out what went wrong. 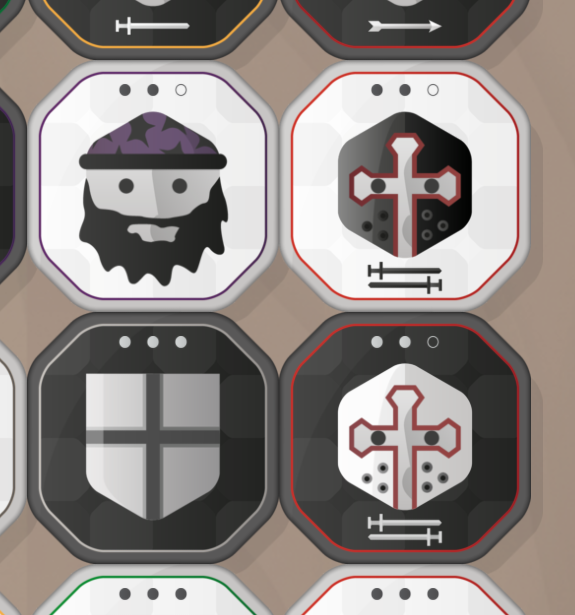 Very clever!  I like games that do a lot with a little.  I just wish it had an undo button for when I realise I've made the wrong swap ;)

Fantastic!
Exactly what you call "easy to learn but difficult to master". It reminds me some chess-based games. I had such fun and it was difficult to stop.
Keep going!

Pity that for time being the Linux version is by two grades outdated.

Hey, the Linux version actually isn't out of date! Those are just the version numbers assigned by Itch. :)

i got my ass kicked 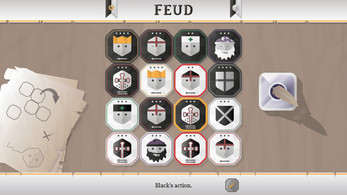 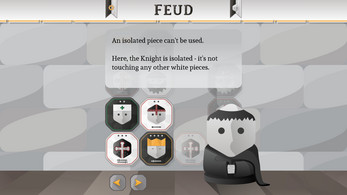 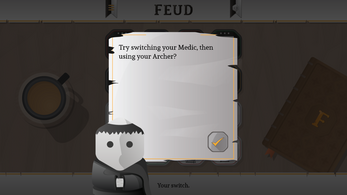